It has been 18 days since I last blogged about my NaMoPaiMo (National Model Painting Month) piece, and for good reason. I have spent the last two weeks trying to get over a nasty upper respiratory infection. Sadly, it persists, but I am much better today, and ready to blog again.

I have accomplished very little during the past sixteen days, but I did complete two tasks of note. First, using prismacolor pencils, I applied a somewhat even layer of dark grey fleabites to my piece. Those familiar with the horse color termed "flea-bitten grey" will know that the color that I'm painting is usually referred to as "black" flea-bitten, which is opposed to the color that is commonly called  "red"(chestnut or bay) flea-bitten grey.  My piece has a slightly greater concentration of fleabites over the shoulders, neck and head, which is a common variant of the pattern.  It is absolutely not necessary for fleabites to be distributed evenly; you will sometimes see a real horse with entire "sections" (such as the barrel, etc.) that are nearly devoid of fleabites while they are plentiful in another place. With a model horse, however, it is wise to stick with the more common variations unless you are doing a portrait, or plan to show the piece with a real horse reference photo on the side. The fleabites that I applied are tiny, mere taps of the pencil. I can always go back and increase the size and concentration later, if I would like.

The second important task that I completed during the past two weeks was painting the lower legs and tail to the same warm white that I had painted the rest of the horse. Being day 19 of NaMoPaiMo, it is now the time to get the whole horse painted. There is not sufficient time to leave the legs, tail, or hooves, blank; I need to get them in pigments.

Up until today, I had left the lower legs, feet, and lower tail in white primer. Even though I usually wear white cotton gloves while painting, skin oils, and friction will leave the areas that you hold a bit slippery, and pigments/paint will not adhere to those areas as well. If you use acrylics to paint those areas prior to using them as hand-holds, you are likely to wear off the paint, necessitating further sanding and reapplication later. I prefer to just leave them blank and do the painting later in the process.

A fully white (or flea-bitten) grey horse will have a nearly white "background," with only a few, slightly darker areas remaining on the hocks and legs, and perhaps some portions of the mane, tail and face. Pale dappling will be visible in some areas, namely the neck, mid-barrel, lower haunch, and lower shoulder.

A different color, what I will term a slightly dappled grey, like my fellow, will have much more detailed pattern of color to paint on the legs. I found a few excellent leg reference photos for this phase of dappling, and started in with my pastels (senellier brand) and kneeded eraser. At this point, in the progression of the dappled grey pattern, the legs have some of the darkest remaining pigments on the horse. After very roughly sketching in (with pigment), and erasing (with the kneaded eraser) the lightest areas, this is what I have: 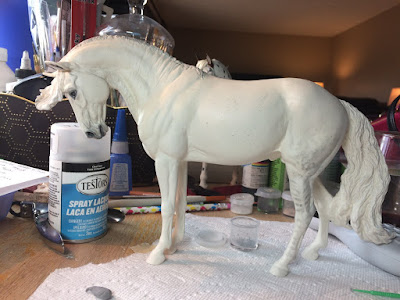 As you will see, the left rump (and right rump, when I get to it) and leg are going to be very detailed. I like where this is going, but I see that I will now need to darken, intensify, and detail some other areas, namely the barrel, shoulder, and neck dappling on the piece, to keep them at the same point in the dappling process as the leg/rump/

I hope to be back in another day or two with updates of my progress and an explanation of my process.

Promote Your Page Too
x